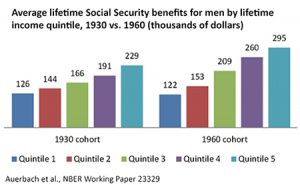 While Americans are living longer, these gains are seen mostly in those at the top of the income distribution. And wealthier Americans not only live longer than poorer Americans, but they reap a financial reward for their longevity via greater lifetime receipt of social security and Medicare benefits. Alan Auerbach, Dana Goldman, Ronald Lee and colleagues gauge the degree to which this income-based divergence in life expectancy creates a gap in the average lifetime benefits received by people in the highest and lowest income quintiles.