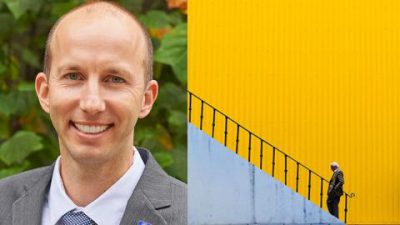 Herman Pontzer (Duke Center for Population Health and Aging) explains where our calories really go, and what studying humanity’s past can teach us about staying healthy today

Pontzer has spent his career counting calories. Not because he’s watching his waistline, exactly. But because, as he sees it, “in the economics of life, calories are the currency.” Every minute, everything the body does — growing, moving, fighting infection, even just existing — “all of it takes energy,” Pontzer says.

In his new book, “Burn,” the evolutionary anthropologist recounts the 10-plus years he and his colleagues have spent measuring the metabolisms of people ranging from ultra-athletes to office workers, as well as those of our closest animal relatives, and some of the surprising insights the research has revealed along the way.

Much of his work takes him to Tanzania, where members of the Hadza tribe still get their food the way our ancestors did — by hunting and gathering. By setting out on foot each day to hunt zebra and antelope or forage for berries and tubers, without guns or electricity or domesticated animals to lighten the load, the Hadza get more physical activity each day than most Westerners get in a week.

He reports the Hadza stay incredibly fit and healthy throughout their lives, even into their older ages (60’s, 70’s, even 80’s). They don’t develop heart disease, diabetes, obesity, or the other diseases that we in the industrialized world are most likely to suffer from. They also have an incredibly active lifestyle, getting more physical activity in a typical day than most Americans get in a week.

So they must burn more calories, right? Wrong.

Pontzer and his colleagues have found that, despite their high activity levels, the Hadza don’t burn more energy per day than sedentary people in the U.S. and Europe.

“Our metabolic engines were not crafted by millions of years of evolution to guarantee a beach-ready bikini body,” Pontzer says. But rather, our metabolism has been primed “to pack on more fat than any other ape.” What’s more, our metabolism responds to changes in exercise and diet in ways that thwart our efforts to shed pounds.