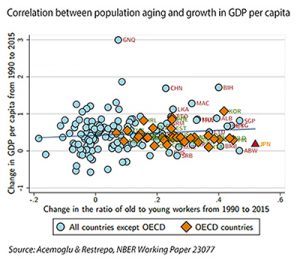 At the 2017 American Economic Association’s annual conference, a study presented by Daron Acemoglu and Pascual Restrepo indicates a “counterintuitive” finding that countries undergoing more rapid aging have *not* experienced a slower growth of per capita GDP since 1990, perhaps reflecting the simultaneous adoption in these countries of automation technologies. This work is compared to other studies on the link between population aging and economic growth, including one by Nicole Maestas, Kathleen Mullen, and David Powell (RAND) and another by David Bloom, David Canning and Günther Fink (Harvard).

Paper by Maestas, Mullen, and Powell

Paper by Bloom, Canning, and Fink

Paper by Acemoglu and Restrepo