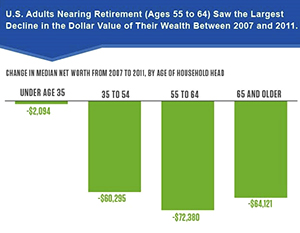 As highlighted in this PRB report, recent NIA-supported studies have examined how the collapse of the labor, housing, and stock markets that began in 2007 has disparately impacted Americans. Although younger Americans took the biggest hit, they found that older adults also suffered. For example, Fabian Pfeffer, Sheldon Danziger, and Bob Schoeni found that adults 55 to 64 suffered the largest decrease in the dollar value of their wealth between 2007 and 2011.