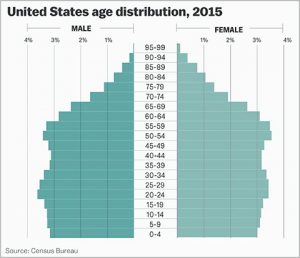 Nicole Maestas, Kathleen Mullen, and David Powell used predicted variation in the rate of population aging across U.S. states from 1980 to 2010 to estimate the economic impact of aging on state output per capita. They found that a 10% increase in the fraction of the population aged 60+ decreased the growth rate of GDP per capita by 5.5%. For the entire U.S., they predict annual GDP growth will slow by 1.2 percentage points this decade and 0.6 percentage points next decade due to population aging.