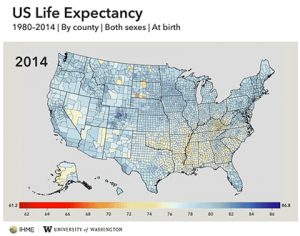 Analyzing records from every U.S. county between 1980 and 2014, researchers found a growing gap in lifespan – more than 20 years in 2014 – between counties with the longest and shortest life expectancy. Residents in counties with the shortest lifespans tend to be poorer and less educated than their counterparts. Also, it appears that these residents have made little progress over the past three decades in reducing health problems related to smoking and obesity. Co-author of the report, Ali Mokdad, says the US has a health disadvantage compared to peer countries in reducing behavior-related disease. “Smoking, physical inactivity, obesity, high blood pressure — these are preventable risk factors,” Mokdad said.