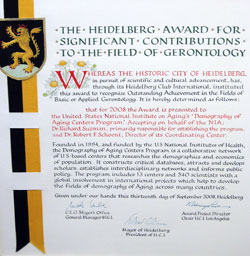 The 2008 Heidelberg Club International (HCI) prize for significant contributions to the field of gerontology was awarded to Dr. Richard Suzman (U.S. National Institute on Aging) and Dr. Robert F. Schoeni (University of Michigan), representing all those involved in the Demography of Aging Centers Program. The program, which includes 13 Centers and 540 scientists, was noted for its crucial role in building basic scientific databases in the field of gerontological research. In addition, the program is commended for its promotion of excellent scientists and for its accomplishments in the maintenance and promotion of interdisciplinary cooperation. Accepting the award on behalf of the Demography of Aging Centers were Dr. John G. Haaga (National Institute on Aging) and Dr. Michael Hurd (RAND).