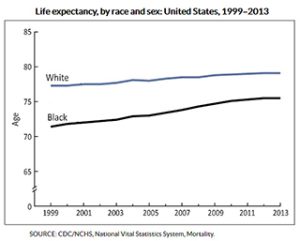 The life expectancy gap for white and black Americans, 7 years in 1990, is now about half that at 3.4 years. While some of this due to whites suffering setbacks in longevity, most is due to real progress for blacks. A decline in violence and homicide over the last 20 years has impacted longevity as well as overall wellbeing. Robert Sampson says: “There are all kinds of negative consequences that flow from violence, in emotional responses, cognitive development, and links to future violent behavior. This change has provided an advantage that wasn’t expected.” Other real changes for blacks that improve life expectancy include a decrease in infant mortality, a decrease in suicide rates for black men, improvements in health care, and lower rates of smoking. Samuel Preston says: “Blacks are catching up. The gap is now the narrowest it has been since the beginning of the 20th century, and that’s really good news.”