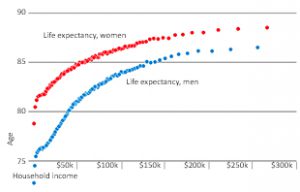 "Income and Mortality in America: Much Ado about Nothing New" - Scientific American. 04/12/2016

Analyzing more that 1.4 billion records from the SSA and the IRS, Raj Chetty, David Cutler et al. found “vast gaps in life expectancy between the richest and poorest Americans,” says Chetty. But they also found that geography matters more for the poor. That is, poor people living in more affluent locales tend to live longer than poor people in rust belt cities such as Detroit.